Puberty suppression and executive functioning: An fMRI-study in adolescents with gender dysphoria

The authors test the effects of a mean 1.6 years of puberty suppression on performance in the Tower of London (ToL) cognitive test and brain region activation during this test. The treated group was twenty adolescents (twelve female, eight male) with gender dysphoria (GD). The controls were a group of twenty untreated GD controls (untreated GD), and an additional group of forty-five participants without GD.

The ToL test involves a diagram of a set of pegs and coloured beads in a starting arrangement and target arrangement. Researchers ask the test-taker how many steps are required to shift the beads from start to target (Figure 1.). The participants also had their brains scanned with functional Magnetic Resonance Imaging while completing the test. 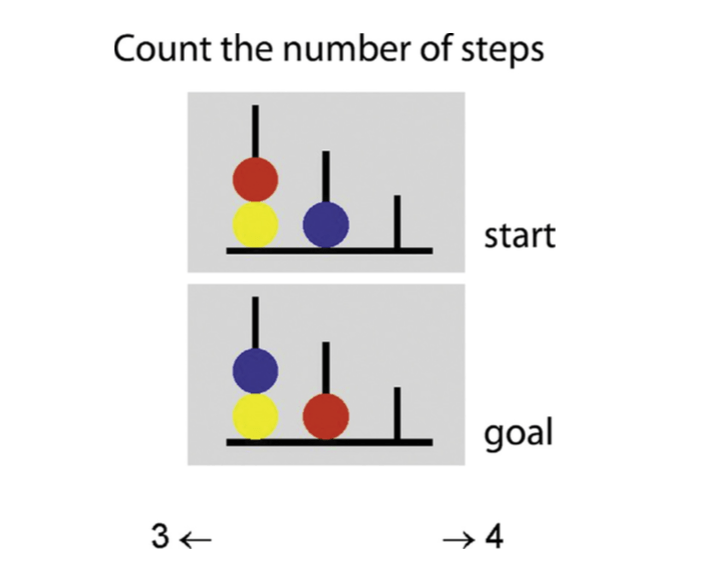 The treated male group also had a significantly lower IQ (94) than both untreated GD males (109) and male controls (111). Presumably, IQ was measured before treatment began, and a lower IQ was not a result of puberty blockers. The study text does not make this clear or report results at different stages. The treated male ToL result was still significantly different from controls when adjusted for differences in IQ between these groups. However, with only 8 participants in this group, the authors highlight the difficulty of drawing firm conclusions.

The authors found some differences in brain region activation during the test, but these are outside the scope of the current interest.

Buried in the study text was the statement that the adolescents with gender dysphoria in the study (40 treated and untreated) were “all sexually attracted to partners of their natal sex”. In other words, they were all homosexual. The low percentage of homosexuality in the general population means that this is not by chance.

A 100% homosexual study population is a cause of troubling concern when we consider that diagnostic criteria for gender dysphoria include cross-sex stereotypical behaviour (e.g. boys playing with dolls and girls with toy trucks). Children who exhibit these behaviours are more likely to grow up to be gay and lesbian adults without gender dysphoria.

Further, a BBC Newsnight investigation reveals the influence of anti-homosexual attitudes amongst the parents of children referred to gender clinics:

Some parents preferred their child was transgender and straight, rather than gay, pushing them towards transition.

The study does not discuss this possibility or ethics of medical interventions for children who may grow up to be non-GD gay and lesbian adults - the “transing” of gay children.

The study’s short duration and low sample size limit conclusions but results are consistent a risk to cognitive function from puberty suppression.