Pubertal Suppression for Transgender Youth and Risk of Suicidal Ideation

The authors analyse a sample of 3,494 transgender adults from the 2015 US Transgender Survey (UTS). The aim was to investigate any difference in suicidality and mental health outcomes between respondents supposedly treated with puberty blockers (n=89) compared to respondents who stated they desired blockers but had not received them (n=3405). The study has several flaws that render the results of no value.

Biggs (2020) points out several problems with the study design.

First, the UTS is a convenience sample with respondents recruited online and not representative of the gender dysphoric population. The study offered prizes and allowed respondents to answer multiple times, attempting to screen cheating respondents with a simple yes/no question (Figure 1.)

Of particular significance for a study examining suicidality is the natural exclusion of those who have committed suicide. The study targeted people identifying as transgender and will also have likely excluded those who have undergone treatment but no longer have a transgender identification.

Second, the UTS team believe that many respondents were confused by the two questions on puberty-blocking hormones (Figure 1).

While puberty-blocking medications delay physical changes associated with puberty in youth ages 9–16 before beginning hormone replacement therapy, a large majority (73%) of respondents who reported having taken puberty blockers in Q.12.9 reported doing so after age 18 in Q.12.11. The question may have been misinterpreted by some respondents who confused puberty blockers with the hormone therapy given to adults and older adolescents (James et al., 2016, p. 126) 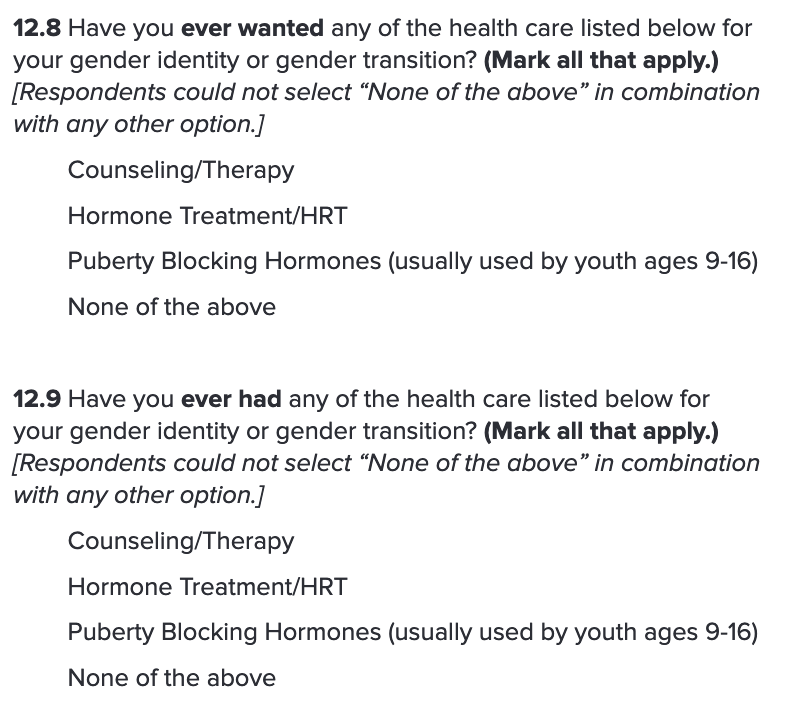 The UTS team and Turban et al. adjust their figures by excluding the 73% of this sample who reported taking blockers after age 18. But there is no reason to believe that younger respondents were not similarly confused, and this adjustment is not possible for the comparison group who stated they desire blockers but had not taken them (Biggs, 2020).

Third, the sample included a large proportion who had no opportunity to take blockers during puberty. The authors give 1998 as the year that puberty-blocking treatment became available in the US referencing Spack et al. (2012). They limit their samples to respondents 17 or younger in 1998, arguing that this group would have had access to puberty blockers. Biggs points that 1998 is far too early as the date of general availability of blockers in the US and drawing on Spack’s statements and other lines of evidence Biggs argues that a more accurate date would be 2009:

Although this hospital provided cross-sex hormones from 1998, puberty blockers were not offered until Spack co-founded its Gender Management Service in 2007…That was the first specialised gender clinic for children in the U.S. …Only in 2009 did the Endocrine Society recommend puberty suppression for gender identity disorder (as gender dysphoria was then known); Spack helped to write its guidelines… “There was an attitudinal shift to be able to say that the Endocrine Society supports this,” he recalled a few years later (Biggs 2020).

With all of the above issues, including a misunderstanding of basic historical facts regarding the availability of puberty blockers, the results are hard to take seriously. Indeed, the editor notes that Biggs submitted his critique to the publishing journal Pediatrics. It was rejected without explanation, suggesting an embarrassment at having let the study through peer review.

Turban et al. test the groups for nine measures across suicidality, suicide attempts, substance abuse and poor mental health. They found that the “treated” group has significantly lower odds in one of these measures, lifetime suicidal ideation, after adjusting for several factors. More severe measures, such as suicide attempts in the past 12 months, were higher in the “treated” group, but this did not reach significance.

In Biggs’ view, the study ”contributed nothing to our knowledge of the effects of suppressing puberty in adolescents.” The main conclusion concerns the light touch that flawed studies of this kind receive in the peer-review process.