Dr Will Malone, a US-based endocrinologist, posted a twitter thread on "Rapid Onset Gender Dysphoria" (ROGD) in early December. The thread was highly informative. We have compiled and edited this thread into blogpost format.

Every gender clinic in the world has documented the rapid rise in numbers of girls wishing to change sex. Kaltiala-Heino (Finland) describes the phenomenon in her 2018 peer-reviewed publication

Why the increase in referrals?​

Zucker et al observed an increase in the number of adolescents presenting at gender identity services in the early 2000s. Since then, several gender identity services for minors from across Western countries have reported increases. Simultaneously, the earlier overrepresentation of natal boys has equaled or turned to overrepresentation of natal girls. Natal girls now comprise from half to ~90% of clinical adolescent samples. The reasons for these changes are not known. The increase in referrals could be attributable to enhanced provision of services, or the threshold for seeking help may now be lower due to increased knowledge and improved societal acceptance. Aitken et al, however, did not find evidence supporting a lowered threshold to gender identity services. Sociocultural features related to what kind of identities are available for whom, and sex-related differences of pressure to conform may play a role.

The UK clinicians are also seeing rapidly increasing numbers of cases of adolescent females with recent-onset gender dysphoria and complex mental health histories. They are concerned by this poorly understood change and the treatment implications.

In line with this distinction, in the UK specialist gender service, it is recognised that there is a group of ‘early presenters’ who have embarked on physical treatment in the early stages of puberty and are generally doing well. However, the majority of referrals to the specialist gender identity service in the United Kingdom consist of older adolescents who present after having gone through puberty (Butler, de Graaf, Wren, & Carmichael, 2018; de Graaf, Giovanardi, Zitz & Carmichael, 2018). Compared to the early presenters, these ‘late presenters’ represent a more heterogeneous group and are more likely to identify in various ways across the gender spectrum. A proportion may present with some difficulties; however, the majority report significant psychopathology and broader identity confusion than gender identity issues alone (de Graaf et al., 2017; Kaltiala-Heino et al., 2015).

This phenomenon has a provisional name of “Rapid Onset Gender Dysphoria” coined by Lisa Littman. Clinicians who are in the room with these teens agree this is a real, and growing phenomenon :

"As clinicians used to working in the field of child and adolescent gender identity development, dealing directly with the very significant distress caused by gender dysphoria, and considering deeply its multifactorial and heterogeneous etiology, we note the current debate arising from Littman’s (2018) description of a phenomenon she described as Rapid-Onset Gender Dysphoria. Littman’s paper on the subject was methodologically critiqued in this journal recently (Restar, 2019). While some of us have informally tended toward describing the phenomenon we witness as “adolescent-onset” gender dysphoria, that is, without any notable symptom history prior to or during the early stages of puberty (certainly nothing of clinical significance), Littman’s description resonates with our clinical experiences from within the consulting room."

Yet another group of experienced UK gender clinicians agrees: “This rapid onset of gender dysphoria in assigned females post puberty is indeed a worrying phenomenon we are observing more and more”

In fact, over a dozen publications in the last few years have documented Rapid-Onset-Gender-Dysphoria-type onset. As Zucker, the world’s leading authority in gender dysphoria has written:

“It is not entirely clear to me why some clinician and “armchair” critics have been so skeptical about the possible veridicality of ROGD. Perhaps because Littman (2018) advanced a set of hypotheses about predisposing psychosocial factors in its genesis, the objection is that this disrupts an essentialist model of gender dysphoria and, therefore, has therapeutic implications.

The phenomenom is well-documented and easily-demonstrable (see a telling graph from The Economist article). 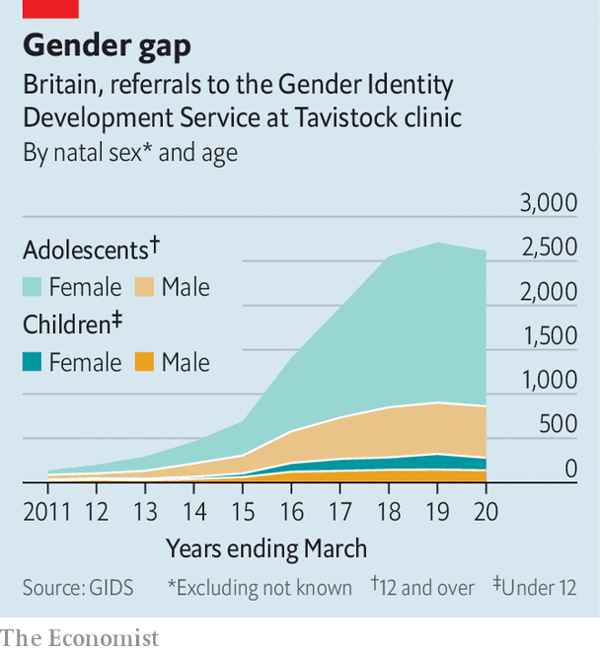 Britain, referrals to the Gender Identity Development Service at the Tavistock clinic | The Economist

The rise in refferals has prompted scutiny. The UK, Sweden, and Finland are backing away from early intervention hormones & surgeries.

Finland, the home of one of the most prominent gender researchers in the world, Kaltiala-Heino, evaluated the evidence for hormones and surgeries in 2020 and found it lacking. Finland no longer follows the “affirmation” model for young people.

Sweden concluded the evidence for "affirmation" is lacking. The NHS review is underway. The UK High Court just ruled that patients under 16 can’t consent to the experimental "affirmative" protocol, suggesting that even 16-17 year-olds are vulnerable.

Even the lead investigator of the Dutch protocol recently wrote a commentary in Pediatrics where she warned that the hormonal and surgical treatment protocol is being widely misapplied, as it was never designed for kids with rapid-onset-type presentation.

Given these uncertainties, providing early medical treatment to transgender adolescents remains a challenging area to work in. Prospective longer-term follow-up studies of clinical samples like the study of Sorbara et al1 are needed to inform clinicians so that an individualized approach can be offered that differentiates who will benefit from medical gender affirmation and for whom (additional) mental health support might be more appropriate.

What will happen to these kids without puberty blockers? 11 studies have demonstrated that anywhere between 61-98% of kids whose distress appeared for the first time in childhood will outgrow it before adulthood

The argument that the desisted kids were not “truly trans” has been effectively discredited by reanalyzing the data for those who met the strictest diagnostic criteria for “gender identity disorder”, roughly 70% of them desisted.

Gender dysphoria is a common developmental path for LGB people. Most of the kids who desist grow up to be lesbian and gay. Young lesbian and gay people don't need medical treatment to explore their identity or sexuality. They need guidance from adults who understand how threatening an anti-homosexual social environment can be.