Puberty Blockers - Your Obligations as GPs

The number of young people with gender dysphoria presenting to clinics in NZ has increased markedly in the last decade. Demand for gonadotropin-releasing hormone agonists (“GnRHas”) to block puberty is overwhelming the capacity of youth and sexual health clinics. GPs are increasingly being asked to prescribe a treatment described by the UK High Court as “experimental” as the treatment puts adolescents’ long-term fertility, sexual function, bone health, and cognitive function at risk. Last month, it was revealed that an Australian gender clinic, unnamed for legal reasons, has shifted the responsibility for treatment decisions to the courts due to concerns that adolescents lack the capacity to consent.

Fully Informed is a group of New Zealanders formed in September 2020 out of shared concern over the impacts of GnRHas. We believe GnRHas should be banned or highly restricted for adolescent gender dysphoria as is the case in Finland, Sweden, the UK (under review), and Western Australia .

We wish to highlight your legal obligations, relevant policy developments in other countries, and alternative treatment pathways.

In New Zealand and many countries, there are increasing numbers of youth presenting with gender dysphoria. The causes of this increase are not well understood. 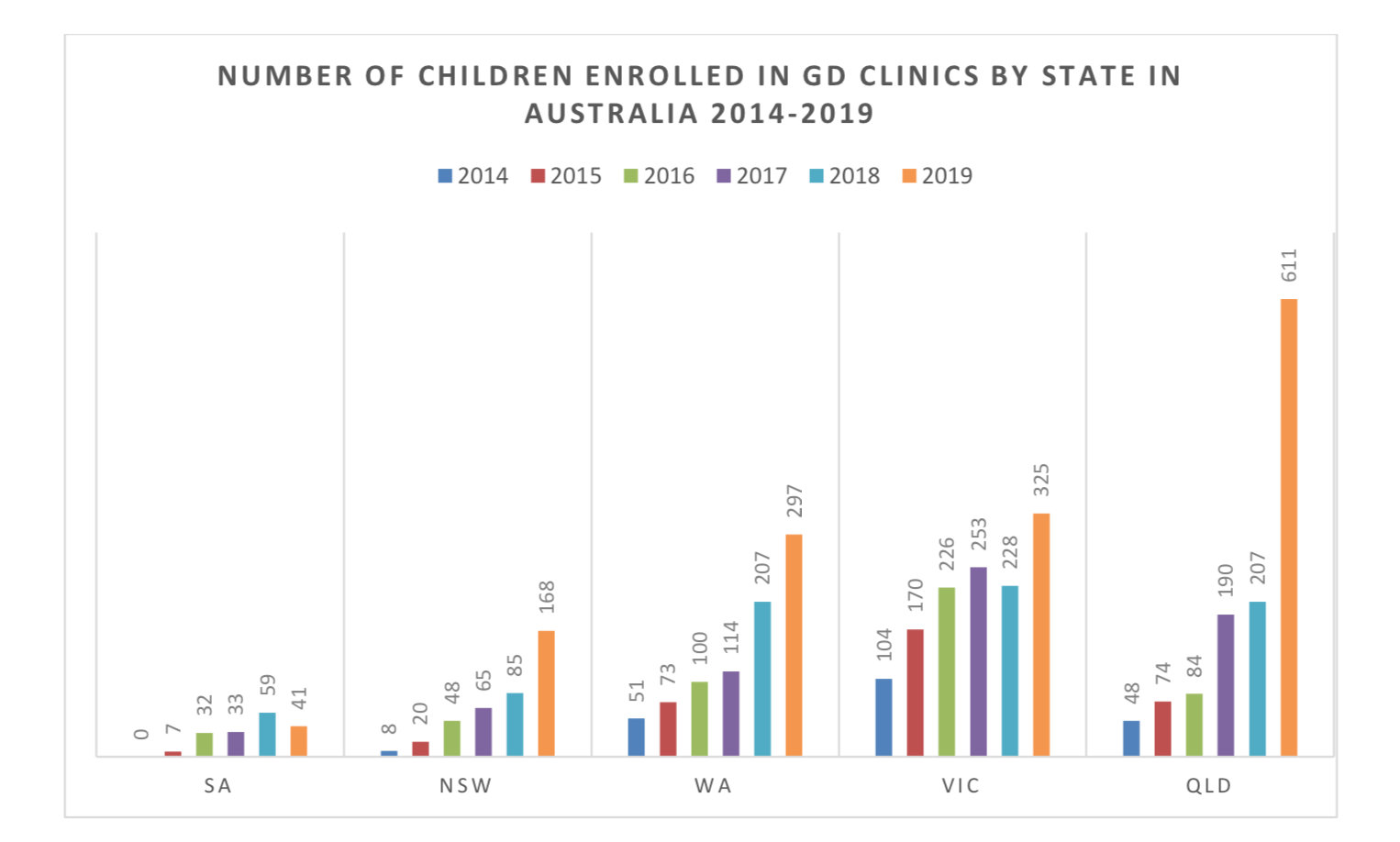 Figure 1. Increasing numbers of adolescents presenting to clinics with gender dysphoria in Australia
The Australian figures come from a report published by the National Association of Practising Psychiatrists .

According to a recent article in The Listener, 60-70% of adolescents presenting with gender dysphoria in New Zealand will be prescribed GnRHas. Another article in Stuff reports that a single youth clinic in Christchurch has about 65 youth on GnRHas out of a total of 100.

In contrast, Australia and The UK (where more detailed data are available) have much lower treatment rates. Only 53 adolescents were referred for GnRHa treatment in 2018 at the Gender Identity Development Service (covering all of England and Wales). More typically, 5-20% of the enrolled patients will be on GnRHa.

Figure 2. below compares the proportion of adolescents treated with GnRHa of the total enrolled at gender clinics. The UK figures have been estimated from an official information request . Australian figures are from the report mentioned above. 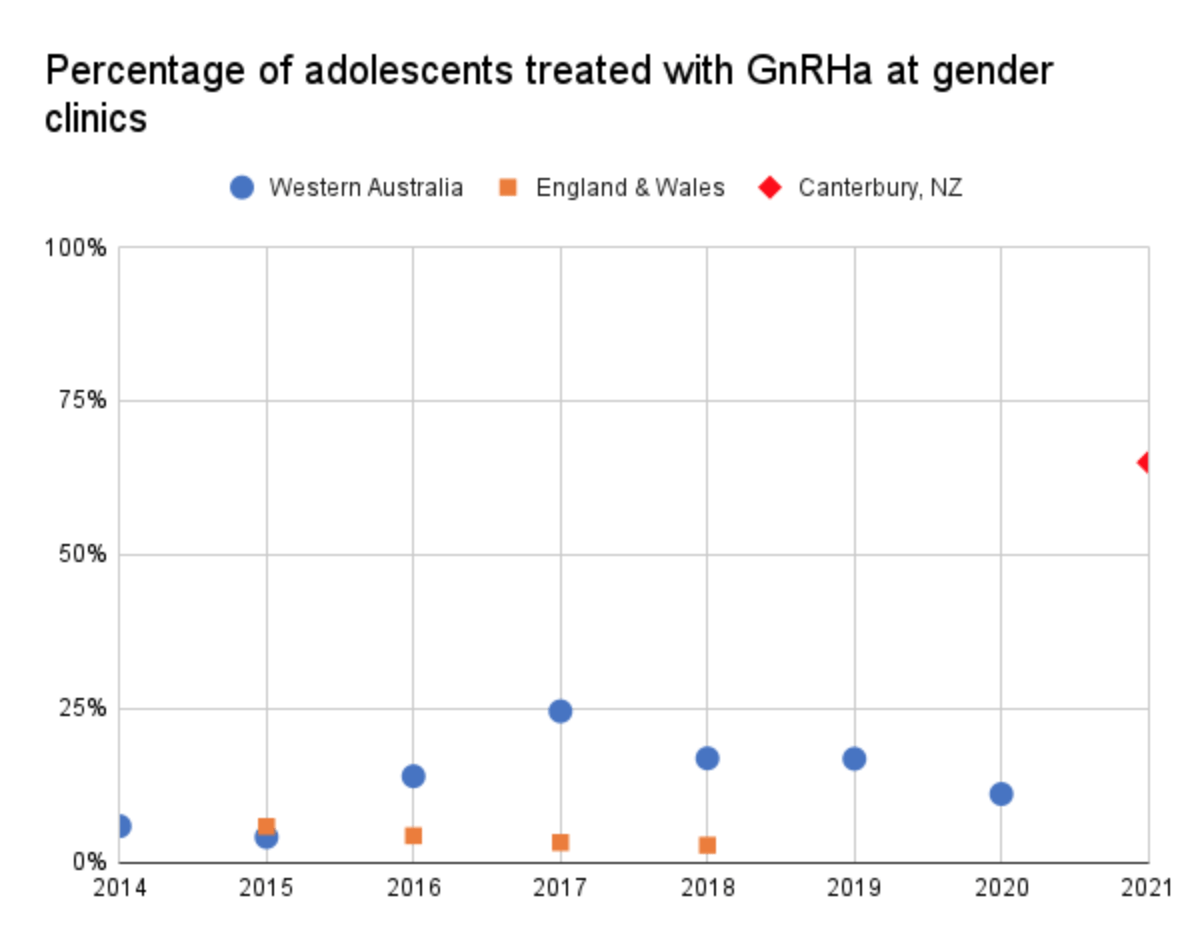 Figure 3. below compares the extrapolated number of adolescents treated with GnRha per 100,000 head of population in the three regions. 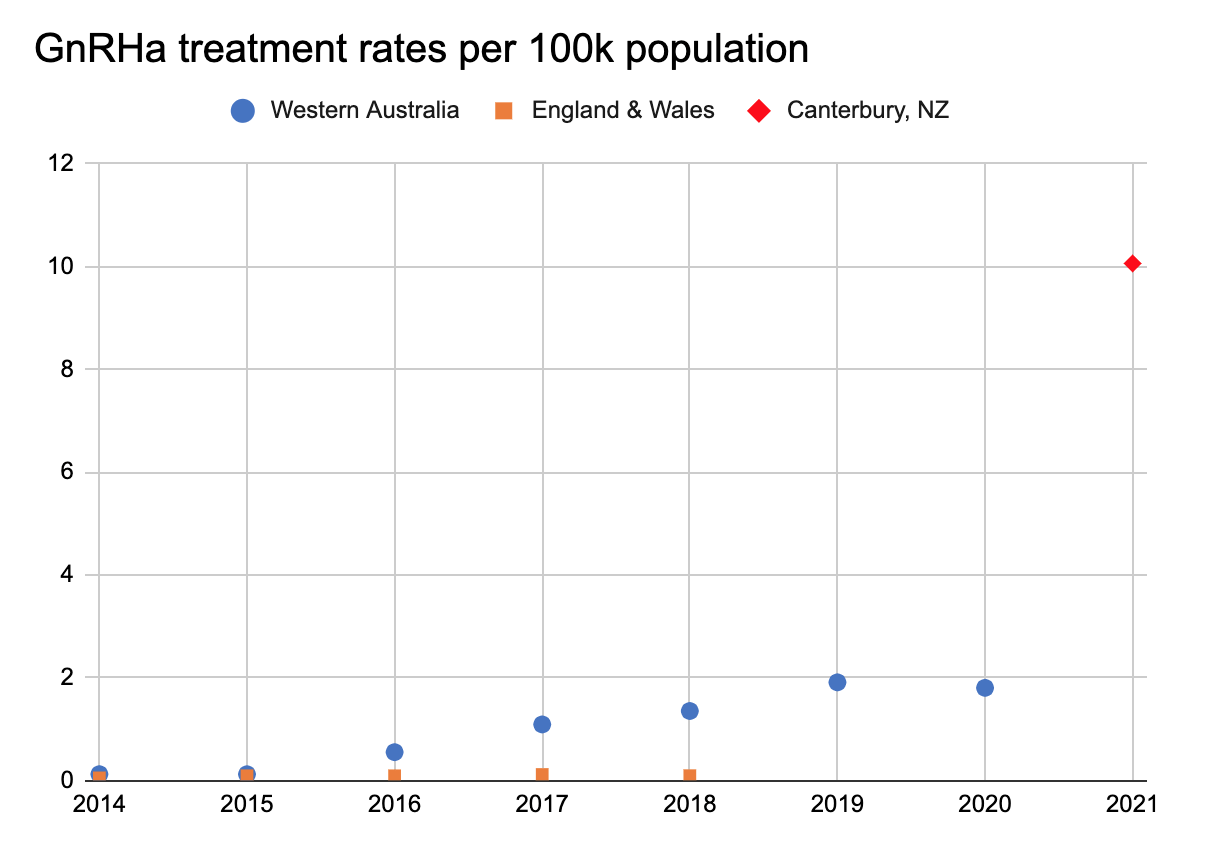 It is clear that GnRHa is used very liberally in New Zealand; likely because:

We think these practices put clinicians and GPs at legal and ethical risk. We outline developments in other countries where the legal and institutional oversight.

The Independent Review of Gender Identity Services for Children and Young People chaired by Dr Hilary Cass (“the Cass Review”) was commissioned by the NHS in late 2020. It promises a wide-ranging review of clinical care as well as an examination of the reasons for the significant increase in referrals, and the disproportionate number of females reflected in this increase. To help inform the Cass Review, the National Institute for Health and Care Excellence (NICE) completed separate evidence reviews of puberty blockers and cross-sex hormones in October 2020 and the results were published in March 2021. Both reviews highlighted significant evidence gaps. In relation to puberty blockers, the NICE team used a modified GRADE (Grading of Recommendations, Assessment, Development and Evaluations) framework to assess data quality. GRADE uses four certainty levels: high, moderate, low and very low. The NICE team assessed the evidence in support of puberty blockers as being in the lowest category of certainty:

“The studies included in this evidence review are all small, uncontrolled observational studies, which are subject to bias and confounding, and all the results are of very low certainty using modified GRADE. They all reported physical and mental health comorbidities and concomitant treatments very poorly. All the studies are from a limited number of, mainly European care facilities…the low number of services providing such care and publishing evidence may bias the results towards the outcomes in these services only and limit extrapolation.” [emphasis added]

“The results of the studies that reported impact on the critical outcomes of gender dysphoria and mental health (depression, anger and anxiety), and the important outcomes of body image and psychosocial impact (global and psychosocial functioning), in children and adolescents with gender dysphoria are of very low certainty using modified GRADE. They suggest little change with GnRH analogues from baseline to follow-up. Studies that found differences in outcomes could represent changes that are either of questionable clinical value, or the studies themselves are not reliable and changes could be due to confounding, bias or chance.” [emphases added]

Under the GRADE framework, treatments with a “very low” certainty rating do not qualify for a guideline recommendation. Fully Informed is very concerned that New Zealand’s treatment guidelines continue to insist that there is “good evidence that puberty blocking and gender affirming care for trans young people significantly improves mental health and wellbeing outcomes.” This statement cannot be justified.

In May 2021, the prestigious Karolinska Hospital in Sweden announced the end of routine administration of puberty blockers and cross-sex hormones to under 18s, citing the NICE reviews (above); the Bell v Tavistock proceedings; as well as Sweden’s own evidence review conducted in 2019. Future interventions will be permitted only in controlled research settings. This policy also applies to other gender clinics in Sweden.

In June 2020 the Finnish Health Authority (PALKO/COHERE) rejected the WPATH Standards of Care “informed consent” model and revised its treatment guidelines, which now emphasise the importance of psychological interventions and support over medical interventions. This change followed a systematic evidence review which found the evidence in support of the medical model to be inconclusive. Although medical transition is still permitted, the guidelines urge caution and medical treatments are typically reserved for early onset cases without co-morbid mental health problems. The guidelines warn that puberty blockers may negatively impact brain maturity.

Dr Annelou De Vries, one of the lead authors of the influential “Dutch Protocol” research, has recently published a commentary urging “caution” about extrapolating the Dutch data to the “overwhelming” numbers of recent adolescent-onset cases, and emphasising the need to consider mental health support rather than medical transition: De Vries “Challenges in Timing Puberty Suppression for Gender Non-Conforming Adolescents” Paediatrics (2020) 146(4)).
The Dutch Protocol (ie. hormonal and surgical interventions for youth) was designed for a very different population of high-functioning teens with childhood-onset dysphoria and no significant mental health comorbidities.

In January 2021 the Irish College of General Practitioners published its “Guide for Providing Care for Transgender Patients in Primary Care.” A month later, the Guide was retracted and an updated version was published. The updated version revises statements on puberty blockers, deleting the earlier description of blockers as “reversible” and adding information on side-effects. The updated version also places greater emphasis on psychotherapy and refers to the limited evidence base for blockers.

Clinicians must give effect to patient rights to fully informed consent. This includes spelling out risks to cognitive function, bone health, sexual function and fertility, even when these risks are uncertain. The patient must also have the capacity to understand the risks. Following the Bell Judgement, the UK and Western Australia now require a court order before GnRHa treatment can proceed.

Fortunately, there are clinics that have taken a more responsible evidence-based approach. Clinicians at the Westmead Children’s hospital in NSW have published research showing that children with gender dysphoria have significantly higher rates of bullying, sexual abuse and parental loss. The clinicians reccomend psychosocial therapies as the primary intervention. The NAPP have issued a statement supporting this approach and the Australian Doctor reported on the research. In the UK, clinicians Susan and Marcus Evans have also published Gender Dysphoria: A Therapeutic Model for Working with Children, Adolescents and Young People 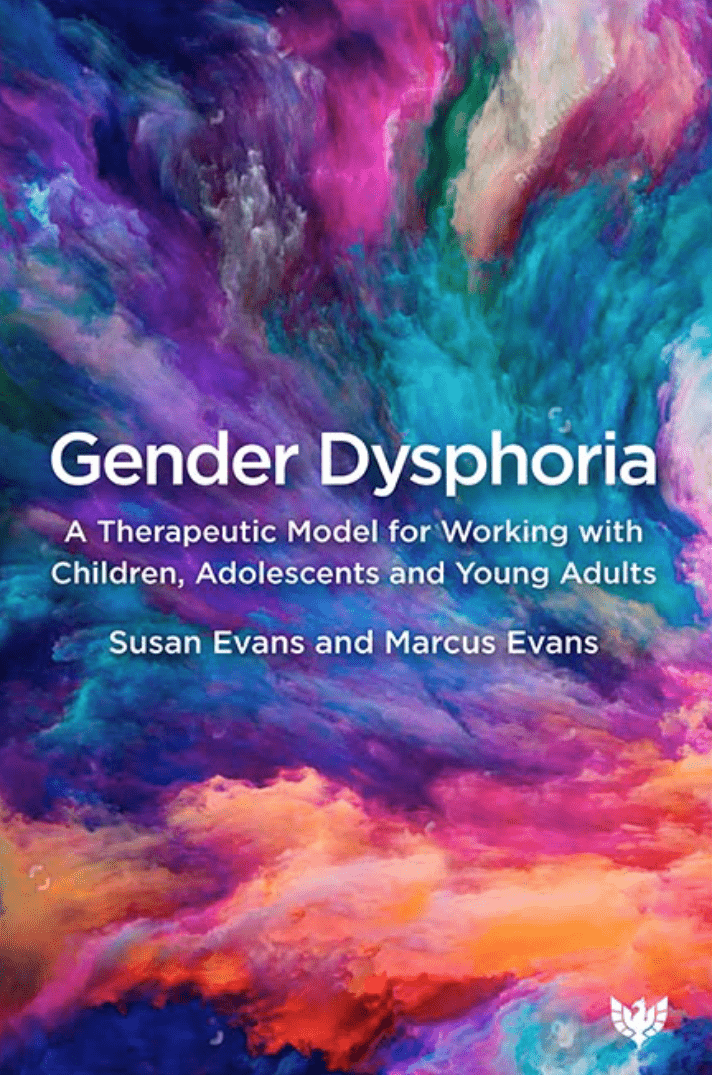 Please submit on the proposed conversion therapy bill . Psychosocial therapies that address the underlying causes of gender dysphoria could be swept up by a poorly worded law.

Ask the Ministry of Health to: